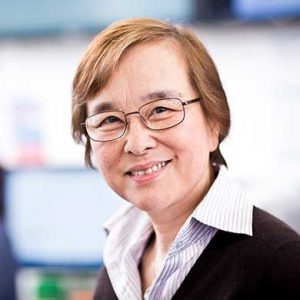 Dame Xiangqian (Jane) Jiang DBE, DSc, FREng is Professor of Precision Metrology at the University of Huddersfield’s Centre for Precision Technologies. She is the Director of the EPSRC Future Metrology Hub and is the Renishaw/Royal Academy of Engineering Chair in Precision Metrology. In 2017 she was recognised in the Queen's Birthday Honours list and was made a Dame Commander of the Order of the British Empire for services to Engineering and Manufacturing.

Jane started her career as an apprentice. She spent twenty years in the Chinese automotive industry moving from an apprentice to a qualified engineer.

In 1990, Jane started her academic life as an MSc student in measurement science, and transferred directly to a PhD programme where she focused on measurement instruments research. Jane obtained her PhD in 1995 with a thesis entitled “Theory and method for measurement of curved surface topography”.

In 1994-1995, she became a visiting scholar at the Measurement and Instrumentation Centre at City University with Professor Ken Grattan FREng.

In 1996, Jane joined the Centre for Metrology at the University of Birmingham with the late Professor Kenneth Stout. In 1997, the research group moved to the University of Huddersfield, where the Centre for Precision Technologies was founded. She first worked as a Research Fellow on the development of standards for areal surface metrology. She was awarded a Chair in Precision Metrology in 2003 and a DSc for precision metrology in 2007. She became the Director of the EPSRC Centre for Innovative Manufacturing in Advanced Metrology in 2011 which ran until early 2017. She was awarded the Renishaw/Royal Academy Chair in Precision Metrology in 2016 and became the Director of the EPSRC Future Metrology Hub, one of eight EPSRC funded Future Manufacturing Research Hubs, in 2017.

Besides this, she enjoys philosophical research in these subject areas, successfully leading a “Paradigm Shifts Review in Surface Metrology” (Proc. Roy. Soc. A, 2007) and a 2011 Royal Society Discussion Meeting “Ultra Precision Engineering – from Physics to Manufacturing” (Phil. Trans. R. Soc. A 2012).

Jane has published over 330 papers, is the author/co-author of 8 books and has several patents in the field of measurement science/surface metrology. She held a prestigious European Research Council (ERC) Advanced Investigator Grant between 2009-2015 and is a principle member of ISO/TC 213 and BSI TW/4, as well as an Advisory Member for the UK National Measurement System.